Exhibition of the painter Dmitry Kustanovich in Sochi

The first solo exhibition of the Petersburg's painter Dmitry Kustanovich after the total quarantine will be held from July 11 to August 12, 2020 at the Fort Gallery in Sochi.

The exposition is repleted with premieres - visitors will be the first to see the new landscapes from the «Middle Strip» series and other paintings created by the author, including those of the period of isolation, which became incredibly fruitful for the author. Traditionally, the Fort Gallery will be attended by new paintings from the famous series «Butterflies», as well as urban landscapes.

Exhibitions of Dmitry Kustanovich's paintings in Sochi are becoming a tradition. The Fort Gallery is exhibiting the works of the Petersburg's master for the third time. The opening of the exhibition, held in 2019, the author attended in person and later conducted a master class.

The founder of spatial realism — authorial style of painting  in which the space depicted within the same plane and within the limits of the realistic method, through the expressive means of painting, acquires the effect of three-dimensionality and dynamism, one of the most demanded Russian authors,  Dmitry Kustanovich was recently added to the list of the best contemporary artists of Russia (by version of ARTEEX 2019). Unique creative handwriting of the painter, fascinating depth, inimitable aesthetic of the master's paintings achieved acclaim of art critics, collectors and connoisseurs of painting. The works of Dmitry Kustanovich, who held more than 100 exhibitions from 1995 to 2020, are in private collections in the majority of countries of the world. Since 2010 the personal gallery of the painter called the Gallery of Kustanovich has been operating in St. Petersburg.

Dmitry Kustanovich, being a brave innovator and an artist of his time, stays true to traditions of the Russian school of painting. A wide palette of images and styles is united by a peculiar, personal view of the artist — the language of emotions, close and understandable to the viewer.

Authorial technique of Dmitry Kustanovich who paints mainly with a palette knife, sometimes creates an impressive effect of the voluminosity of the subjects. The manner of painting often seems improvisational and expressive, but is subject to strict academic proportions and impeccable taste.

A new collaborative work of the painters Dmitry Kustanovich and Natalia Savina «The Atlanteans of Hermitage» will be presented as part of the exhibition. 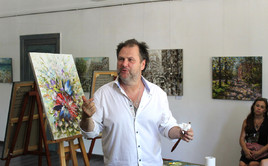 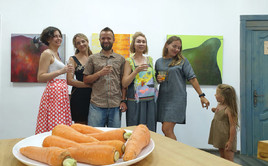 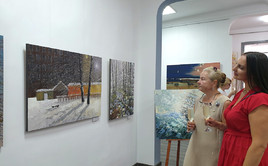 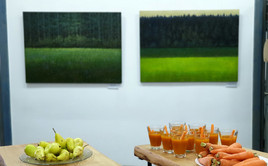